The mission of the Program for Assistive Technologies for Underprivileged (PATU) is to allow students to practice engineering skills while they develop strong communication and teamwork skills, gain global perspective, and learn social responsibility through projects for persons with disabilities that otherwise could not afford assistance. 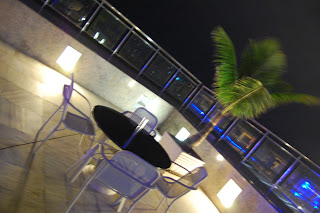 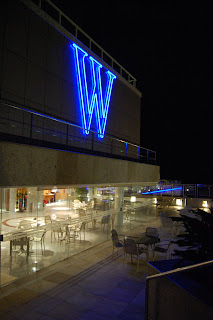 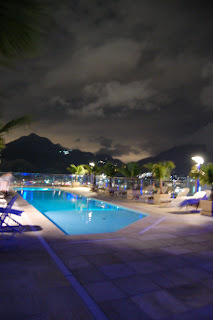 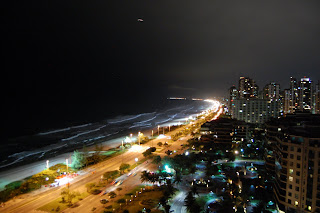 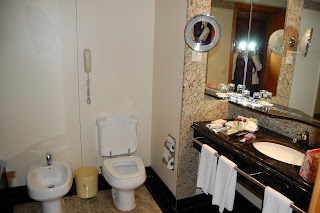 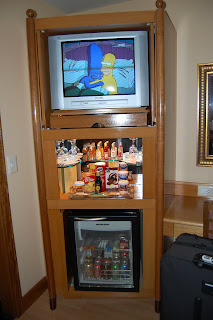 Just thought I'd share some pictures of our hotel :)
Posted by Jodi Prosise, PhD at 5:45 PM No comments:

And the adventure continues 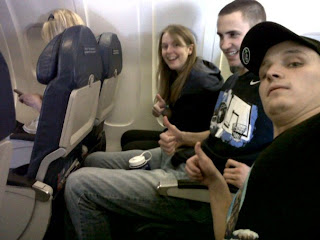 Day 2 of our "travels" started with an easy (but boring) drive to Bloomington, IL (thanks, Dr. Opar!), and a nice easy flight to Atlanta. We were finally on our way! Day two ended while we were on our 10-hour Delta flight from Atlanta to Rio De Janeiro--we took off at 10PM with no hitches. I was soooo tired I was certain I would fall asleep immediately.

Boy was I wrong! I could not get comfortable, quite likely because of the extra weight I'm carrying around, and was only able to steal 1 hour of sleep during our flight. Both Andy and Chris did not have trouble sleeping at all, but Rachel and I made eye contact several times throughout the night, so I know she was having the same troubles I was.

Getting through passport check, baggage claim, and customs was a BREEZE, and I feel silly that I ever worried about that part of the trip. However, once we left "international" space for "domestic", it was like we entered another world...one that didn't speak English anymore (duh, it's called Brasil, right?). The Gol flight staff herded us to a counter where the ticket agents spoke a few words of English so we could get checked in to our next two flight (to Salvador, then finally to Ilheus). We got ourselves and our luggage all checked in without a hitch, with over an hour to spare! Just one more stopover to worry about and we'd be home free!

Or so I thought! We were early, so we sat patiently in the waiting area near our gate. It was even too early for our flight to show on the departure TV screen. We all seemed to be watching this screen very keenly for our flight, just because of all the problems we have already encountered. And what would you know, but as SOON as there is enough room at the bottom of the screen, our flight shows as CANCELADO. Chris, being the sweetheart he is says "Uh, what does 'cancelado' mean?" He knew full well what it meant, but he was trying to break the news lightly. I immediately jumped up and headed to the information desk. Oy!

There was a lot of fast Portuguese being spoken as other passengers were also unhappy with this news. I don't know Portuguese, but I do know Spanish, and often can understand a bit of what is going on if I listen closely enough. Not here. Too much fast frantic talking! But one thing I did hear--"Ilheus". They were asking for those of us who's final destination was Ilheus! Maybe we still had a chance.

They pulled all IOS (Ilheus airport code) passengers aside and told us they were going to take us to the other airport in Rio to get us on a flight to Ilheus from there. Hot dog, that was exciting news! So we followed our Gol airline staff member to get reticketed and bused out...only to find out that this option was no longer going to be possible and the only way we could get to Ilheus was on a set of flights leaving at 10AM tomorrow morning (Rio-Sau Paulo-Ilheus).

While this broke my heart and pretty much broke the last nerve I had (leaving tears to well up in my eyes), what was I to do? I was at the mercy of the nice Gols gentlemen they assigned to us that could speak English. After what seemed like forever, but was really only about 30-45 minutes, he came back and helped us into two taxis. He had rebooked our flights for tomorrow, arranged to pay our taxi transport to and from a hotel, and put us up in a SWANKY hotel which includes comped meals at the fancy hotel restaurant for the duration of our stay (and even allows us each a 3 minutes call to home!). Thank you, Sean Paulo for taking good care of the foreigners who couldn't speak Portuguese!

Did I also mention that the hotel is on a gorgeous beach and has a pool/bar/hot tub/awesome setup on the rooftop? While it is seriously frustrating that after 3 days we are STILL not in Ilheus, we could definitely be stuck in worse places than Rio de Janeiro. We spent the afternoon relaxing on the beach (after much needed showers and lunch).

We hope our friends from Sweet Briar had a wonderful day with Patty today! We WILL see you tomorrow, God willing! 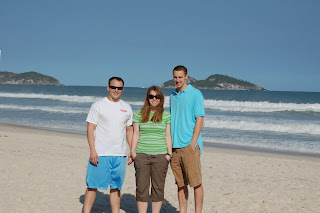 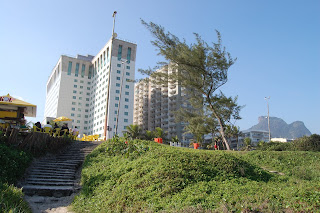 Posted by Jodi Prosise, PhD at 2:08 PM No comments:

Day one went off with a bang...

...or more like a dull thud and fizzled out. Our trip to Ilheus, Bahia, Brasil to deliver and adjust the assistive technologies our students designed over the spring semester was supposed to start yesterday (Sunday), but here I am on Monday, sitting at my home computer, writing about our day. Not a good a sign.

The airport in Moline, IL was the busiest I have ever seen it when we arrived at 10AM yesterday, which was a sign for me that something was up. Apparently there was a crazy storm coming our way and nearly every flight was cancelled and people were trying to rebook--except for ours! Yay! It was just delayed by a little over an hour. This should have been no problem for us, as our layover in Atlanta was 6.5 hours anyway. We had time to kill. While we waited there was, indeed, a violent storm that went through--very crazy winds and hard rain, they made us move away from the windows, and our dear helper Christine and student Rachel were in the parking lot packing some extra suitcases with donations for Brazil! Luckily they didn't blow away!

We got all checked in and through security like a breeze (except Andy had stuffed way too much stuff in his carry on, so they stopped him, made him take everything out, and rescanned it all--they even commented on the amount of crayons and markers he had--funny!). The airline very quickly boarded us 40 minutes before the flight was to take off...and then we sat. We did manage to back away from the gate, but then there was a "circuit breaker" problem that they tried twice to fix (20 minutes) to no avail, then restarted the entire plan (5 minutes), and the problem still didn't go away, so they pulled back up to the gate and we all got out. We were sitting there for about an hour. 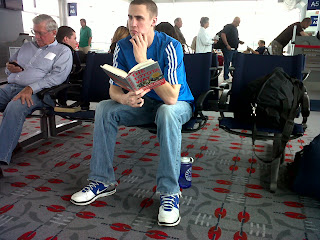 They told us to sit tight at the gate, so we did so patiently. No freaking out yet, right? Look-Chris is even reading an Engineering book--what a good student! We had plenty of time to get to Atlanta. By now it is 2:30CST and our flight was to leave from Atlanta at 8:30CST. I told myself I wouldn't start getting nervous until 3:30, and we really only had to be gone by 5 to make it in time. Many of the other passengers were not so patient--already standing in line to rebook from a flight that had not yet been cancelled. But I was being patient. Perhaps I should not have been.

The line at the counter grew and grew as we sat, but it did not move. The same people were yelling at the poor ticket lady, Diana, at the front for over an hour. What is the point in that? But finally about 3:30 I noticed they were unloading our baggage. They had not yet officially cancelled our flight, but I calmly went and stood in line. A very long line, that was not moving.

So we were not getting out on that flight, the line was not moving, and our time frame was beginning to close. I decided to call the Delta people from my phone while waitingin line--there was absolutely no way we were getting out of Moline in time for our flight to Brasil--not even from a different airline. So I waited patiently some more to rebook so we could get to our destination as soon as possible. They finally "officially" cancelled our flight at 5PM, and I still waited in line. I waited until 6:30PM until they finally got to me.

The real trick in this whole thing is that I am the organizer of this whole trip, but we from St. Ambrose are not the only ones involved! These projects have been completed collaboratively with Sweet Briar College engineering students, and they all made the connecting flight in Atlanta. So while they are on their way, we are stuck. However, they are going blind! I did my best to explain over the phone to them how to go through customs in Sau Paulo and how to fill out their customs forms, and what to do when they arrive in Ilheus. They are smart people--let's just hope they make it there without a hitch and begin our plans as scheduled!

They were unable to book us on ANYTHING out of Moline today, so we are on a flight out of Bloomington, IL (2 hours 15 minutes away). The kind chair of our department, Mike Opar, has graciously agreed to drive us in a rented Hertz minivan so we can make our flight. THANK YOU to all who have helped us through this crazy 24 hours. Let's hope the next 24 go much more smoothly!
Posted by Jodi Prosise, PhD at 5:39 AM 1 comment: 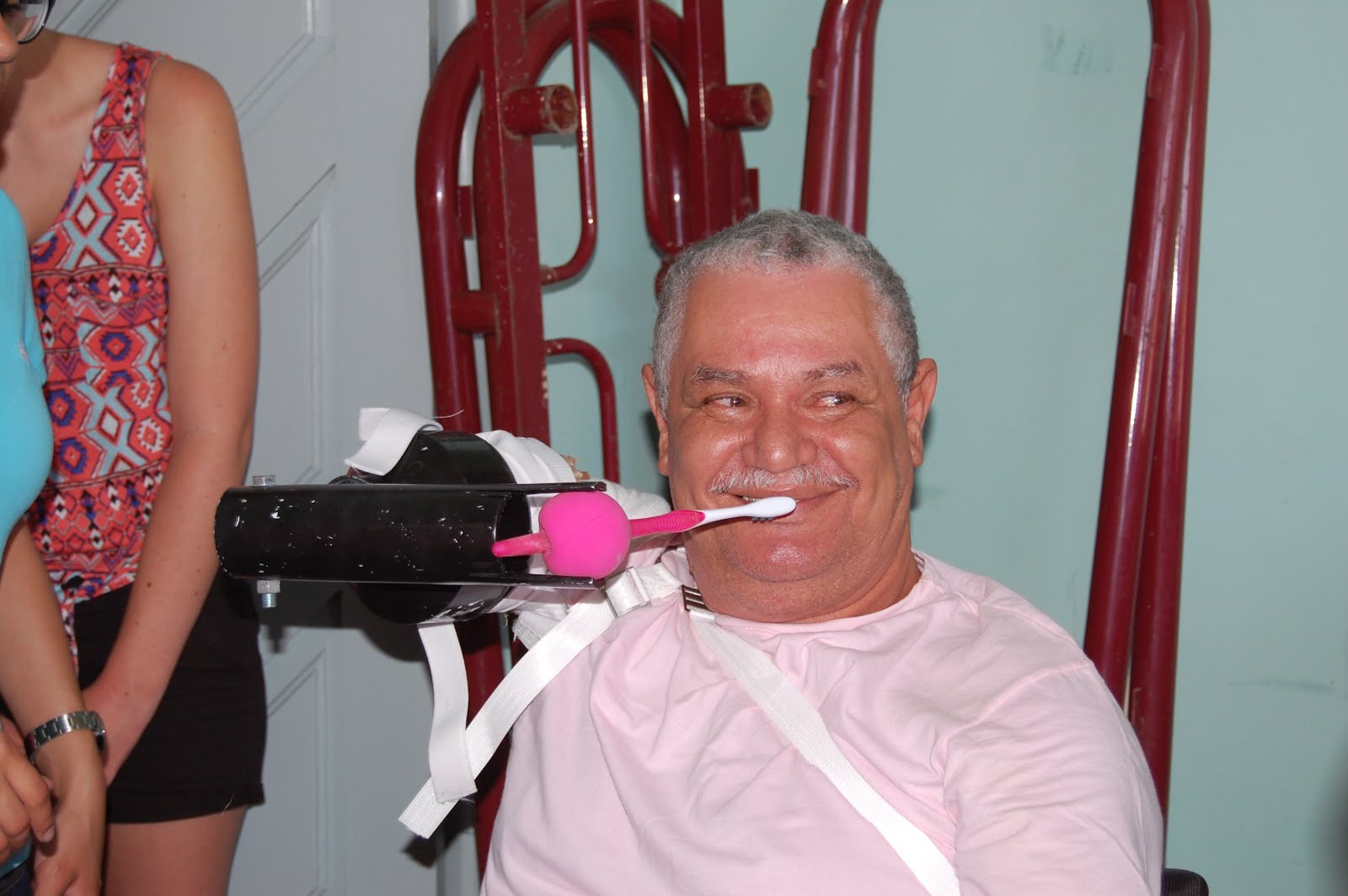 Milton, a quad amputee, can feed himself and brush his own teeth for the first time in 13 years.